October 10, 2020 marked the 40th anniversary of the release of Flowers' debut album, Icehouse.

The 40th anniversary celebration of Icehouse truly started in February when the band played at the St. Kilda Festival which was also celebrating their 40th anniversary in 2020. Flowers had played at the very first St. Kilda Festival in 1980 and ICEHOUSE was invited back to acknowledge and repeat the historical association. That performance, titled ICEHOUSE Plays Flowers, was enthusiastically received by the thousands of fans attending. ICEHOUSE played many of the songs from the debut album, as well as a few cover songs that Flowers were well known for playing.

The February 9th show was recorded and today we are pleased to announce the forthcoming release of a LIVE album of that performance: ICEHOUSE Plays Flowers! Streaming on Spotify, Apple Music and your favourite streaming service will commence from October 30th at which time the CD will be available for purchase online and, within Australia, at your local music store. Additionally, a limited-edition vinyl version of ICEHOUSE Plays Flowers will be available online and in Australian music stores. You can PRE-ORDER the CD and vinyl here - icehouse.lnk.to/ipl

Some fun merchandise celebrating the ICEHOUSE Plays Flowers will also be made available for pre-sale at bandtshirts.com.au/shop/icehouse. This will include a t-shirt, sweatshirt, tote bags and a special stubby holder. This line of merchandise features the original artwork created by Flowers drummer, John Lloyd, and was curated by Iva Davies. Reprints of posters from the Flowers era will also be part of the merchandise presented. These will be in limited quantity.

Pre-order options are available NOW for individual items and also varying package deals of the recordings and merchandise together. Please see the link provided for all of the options available. For those of you who are outside of Australia, please read the online vendor’s options for International shipping. We hope you all enjoy this new release as much as ICEHOUSE enjoyed Playing Flowers! 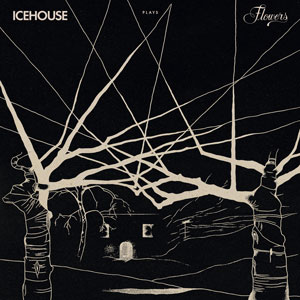 To celebrate the 40 year milestone of the release of their debut album, ICEHOUSE performed the songs from the album, and some very special cover versions which marked the band's beginnings, earlier this year at a 40th anniversary event at St Kilda Festival in Melbourne (which was also celebrating its 40 years). That sold out, dual anniversary performance is set to be released documenting the timeless thrill the music continues to bring, with ICEHOUSE Plays Flowers live album will be released digitally and on CD via Universal Music Australia on October 30th and on double-vinyl in November, now available for pre-sale.